Energy saving has been the topic drawing worldwide attention. The energy consumption from lighting is about 19~20% of the overall global consumption; if LED is the source of lighting, it sufficiently achieves the advantages of electricity saving and long lifetime. Therefore, the market of LED lighting has been vastly growing and fast replacing all kinds of conventional lighting in various kinds of application fields, such as household lighting, industrial lighting, business lighting, street lighting, automobile lighting, plant house lighting, etc. It is the most significant direction governments all over the world is move forward to for energy saving and carbon reduction policy.

Roughly speaking, from the application perspective, electrolytic capacitors for isolated LED drivers are divided into primary capacitors (Cp) and secondary capacitors (Cs) and both have the function of energy storage and filtering. Cp, for EMC solution, does not only absorb the surge energy and prevent flickers resulting from instantaneous power change but also lowers EMI; Cs on the output side is mainly used for filtering, lowering the low frequency current ripple and leading to the improvement for flickers. Many low wattage LED drivers in current market, in order to follow the power factor and harmonic current related norms and to meet the demand for low cost, adopt the single stage flyback without Cp or the PSR topology. The omission of Cp results in the need of additional components for surge test solution; on the other hand, with the output ripple, it cannot meet the demand for low flickers (the low frequency flux change rate is lower than 8%.)

The key factors influencing LED luminaire lifetime are the electrolytic capacitors the light source and the driver use, which are directly related to temperature. The specified lifetime for current lighting units in market is as low as 15,000 hours and as high as 50,000 hours. According to the data provided from the major LED supplier, per LM-80 or TM-21 test, the average lifetime of general high power LED is 50,000 hours or so (the diagram hereunder is from Cree.) The lifetime of LED driver depends on the product level and temperature of the electrolytic capacitors; as a reasonable design practice, it is not supposed to be lower than the lifetime of LED. 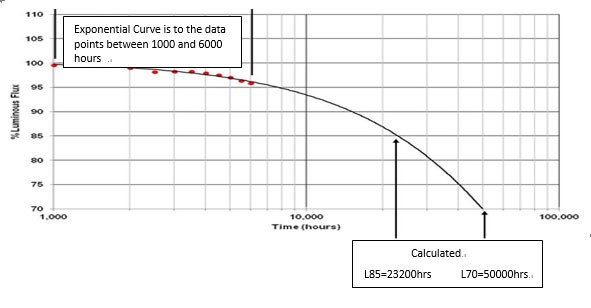